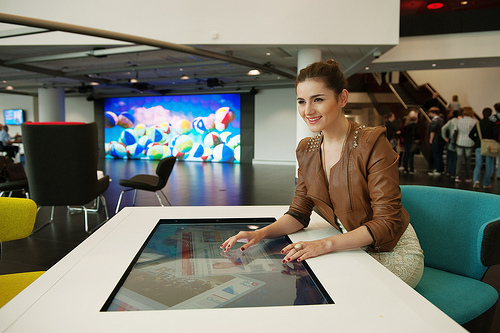 The noble profession of journalism has a long history of attracting proponents of the written word and the cold, hard facts.  For as long as humans have walked the earth, journalism of some sort has been around.  It began with couriers delivering news by word of mouth, then grew to new heights with the invention of the printing press in 1440, and underwent another transformation in recent years with the Internet changing the way we disseminate information.

Journalism as a profession has changed drastically in the past decade.  The rise of the Internet has meant that print newspapers are downsizing and focusing more on the web as they find their place in the digital age.

This change means that it is a tough but exciting time for young journalists.  Career paths are no longer as clear as they once were and colleges have had to update their curriculum significantly to keep up with a quickly changing industry. Today, the best journalism programs are those not only with many awards and a long history, but those that stay ahead of the curve in digital journalism.

If you are considering majoring in journalism, then indulge your inner writer and take a look at these colleges, which offer some of the most highly regarded journalism undergrad programs in the country.

Indiana University- The school of journalism at Indiana University turned 100 years old in 2011.  It offers both graduate and undergraduate degrees and has been the home of 30 Pulitzer Prize-winning alumni.  Some of Indiana’s most famous journalism alumni include Tom French, Don Mellett, Gene Miller and Dave Niehaus (Go Mariners!).

Kent State University- Kent State’s journalism school was established in 1937, yet the school has had a student-run newspaper since 1926.  The school has a reputation for producing quality journalists; of the 105 accredited journalism schools in the U.S. that compete in the Hearst Intercollegiate Writing Contest, Kent students have placed in the top 15 for four of the last six years.  This year a Kent State student was awarded a top television finalist award, along with a $2,600 scholarship from the foundation.

Northwestern University– The Medill School of Journalism was founded in 1921 and has since produced thirty-eight Pulitzer Prize laureates.  The program is constantly one of the top-ranked U.S. journalism schools.  Northwestern also houses the Knight Lab, which was a 2011 initiative that marries reporting and technology to help promote innovation in both fields.

Ohio University- Students in Ohio University’s Journalism School can choose from six difference “sequences,” which include advertising, broadcast news, magazine journalism, news writing and editing, online journalism and public relations.  The school has graduated 13 Pulitzer Prize winners and has recently been recognized as a National Center of Excellence by the Ohio Board of Regents.  As a result, the OU program has been awarded over $54 million in grants and awards.

Syracuse University- This highly selective journalism program has a 9% acceptance rate.  Its first program was established in 1934, when it was the first school to offer college credit for a radio broadcast class.  Syracuse has also consistently been at the forefront of broadcast journalism instruction.  Some notable alums are Bob Costas, Steve Kroft and Joe McNally.

University of Georgia- University of Georgia’s Grady College has three programs within the School of Journalism and Mass Communication: Journalism, Advertising and Public Relations, and Telecommunications.  The school has its own student-run magazine called the UGAzine.  It is also home to the Peabody Awards for excellence in electronic media. Notable alumni include Cathy Cox and John Holliman.

University of Maryland, College Park- The university is home to three college-sponsored student news outlets: the weekly radio show, the nightly television show, and the online news magazine, which have all been called the Best in the Nation by the Society of Professional Journalists (SPJ). The school is also home to the American Journalism Review. Famous alum includes E! News personality Giuliana Rancic, two-time Pulitzer Prize winner Jon Franklin, and renowned broadcast journalist Connie Chung.

University of Missouri- The oldest journalism school in the world, Missouri has a reputation for excellence and producing talented journalists.  It boasts more than 30 different areas of focus within its School of Journalism for undergrads.  Jim Lehrer, Jann Karl, Chuck Roberts and John Anderson are just a few of the many distinguished journalists who have graduated from Mizzou’s program.

University of North Carolina, Chapel Hill- The first journalism class at UNC was taught in 1909, even before the program was established in 1924.  The school of journalism has graduated many noteworthy students and been home to many revered faculty members. These two groups have collected 28 Pulitzer Prizes between them.